A community for fans of Murray State University athletics.

This forum is for the discussion of the men's basketball team.
Post Reply
48 posts

Here's the adjusted player ratings going into this game.....

Here's the predictions for this game…..

This game will be played at a Neutral site so neither team gets a home court advantage adjustment!

Is there anywhere in the net where we can watch these Florida games?
Like this! Liked
Top

Listed by Smidge on page 2 of Brescia thread where you can buy tournament action.

LaSalle may be better than their statistics show. Sagarin has us only seven points better, and being that they are in the Atlantic 10, I don't look for it to be an easy game. Hope our guys take care of business.
Like this! Liked
Top

Looks like it will only be available via FloHoops live streaming. $12.50/month - cancel anytime. I'll probably sign up just to see the 3 games and then cancel.

Outlook: Ashley Howard took over the La Salle job last year from John Giannini, who manned the sidelines for the Explorers for 14 seasons, reaching one NCAA Tournament and one Sweet Sixteen in that span. Howard comes off the Jay Wright coaching tree, serving under the ridiculously good-looking Villanova coach from 2013 - 2018. As expected, La Salle hit some road bumps in year one under Howard, starting the season 0-10, but turned things around once A-10 play began. The Explorers finished a respectable 8-10 in conference (9th place), exceeding their 12th place preseason ranking. This year, La Salle will be without lead guard Pookie Powell, a team leader the past three seasons, but Howard does return a good crop of talent and brings in a promising group of newcomers. Though the Explorers may struggle once again in 2019-20, it's clear Howard has this program trending in the right direction.

Similar to Jay Wright's teams over at Villanova, Howard's squads shoot a ton of threes. In 2018-19, La Salle ranked 1st in the A-10 in percentage of points scored via the three and 3rd in 3P%. Howard likes to run a 4-out, spread offensive scheme with multiple ball handlers on the floor at once and plenty of shooting. Turnovers were an issue last season and likely will continue to be with the departure of Powell and fellow point guard Traci Carter. Howard will need to find consistent ball handling among his bevy of combo guards and wings. Powell's absence is also concerning from a scoring points perspective - La Salle was already terrible offensively, but without Powell on the floor the Explorers mustered a measly 0.87 PPP.
Howard has plenty of returners who can handle the ball, but none of them are true point guards used to conducting an offense. Isiah Deas was the 5th highest used player in the A-10 last season and is capable of creating his own offense or penetrating and dishing to open shooters. He was quite inefficient last year as a junior, but did improve on his 3P% despite shooting a higher volume. He'll need to evolve into a leader this season and be one of La Salle's go-to scorers on offense. Like Deas, David Beatty can also handle the ball, but his true talents lie on the defensive end where he can body opposing ball handlers. The former South Carolina Game Cock shot poorly from the outside during his first year in Philly, but has potential to grow into a more consistent offensive threat after coming out of high school as a highly regarded recruit.
Saul Phiri and Jack Clark likely stay primarily on the wing where they can do damage with their deadeye three-point strokes. Phiri knocked down 39.4% of his trey ball tries last year and Clark connected on 41% of his in limited games. Clark played only nine games for the Explorers last year, missing the first seven due to a high school ACL tear and the latter half of the year due to a lower body injury. When healthy, Clark was one of the best scorers and most reliable shooters on the team. In an offense that prioritizes spacing and shooting, Clark's health will be key in 2019-20.

Clemson transfer Scott Spencer and freshman Christian Ray will provide depth and versatility on the wing while freshmen Ayinde Hikim and Sherif Kenney will compete for starting minutes at the point. Hikim is a 3-star prospect out of Mount Zion Prep who averaged 36 PPG in high school. He's quick and can change directions on a dime, but his ball handling and passing will be his biggest contributions to this squad. Kenney is a 4-star recruit out of Chicago who garnered a slew of high major attention early on in his high school career. At 6'4" 212 lbs, Kenney can use his size and strength to bully smaller defenders into the paint off drives. He has the inside route to an early starting gig in Philly if he can get his body ready from a conditioning perspective.

La Salle doesn't have a ton of size on its roster, but that isn't a death sentence for a team that will most likely run out four guards majority of the time. One of either Jared Kimbrough or Ed Croswell will likely start at the 5, each of whom are beasts on the boards. Croswell has the most potential from a development perspective and led the nation in offensive rebounding rate in 2018-19, posting an insane 18.1% clip. Twice Croswell grabbed 10+ offensive rebounds in a game last season, a staggering stat for any level of basketball. Kimbrough is a better shot blocker than Croswell, but neither stood up to post-ups well last season. Freshman Brandon Stone will compete for playing time in the frontcourt as well; he'll add shooting and can play the 4 alongside either Croswell or Kimbrough thanks to his ability to stretch the floor. His handles are also quite good for a 6'11" guy. WKU grad transfer Moustapha Diagne, Howard's most recent signee, will also see plenty of run up front - he has a burgeoning face-up game to go along with his traditional back-to-the-basket play. He'll add size and rebounding to a roster in need.

La Salle was pretty good defensively last season, paced by a backcourt that applied heavy pressure to opposing ball handlers. The Explorers pressed at the 33rd highest rate in the country last season and allowed the quickest average possession length in the conference, a testament to their goal of speeding up their opponent. Unfortunately, once teams broke through the pressure and perimeter shell, resistance was lacking near the rim. Expect more of the same this season with Howard's seemingly endless supply of wings and similar big man personnel.

Bottom Line: It's hard to see La Salle improving much in conference this year with so many teams around it improving. But, the Explorers should be able to avoid another 0-10 start to the season and have a bright future under the former Villanova assistant.
Like this! Liked
Americans dead by COVID-19 as of 5/5/2020 72,271.
Americans lost in Vietnam- 58,209
Korea- 38,616
All other American dead in every conflict since 1975 including 9/11 and Benghazi- 10,580

From the looks of this, we will need to play good perimeter defense (no fouling the jump shooter ) against these guys as they shoot a ton of 3s. Also, we will need to have good rebounding from every man on the floor as long jumpers lead to long rebounds. They also dont have a ton of size, which means if we can set the tempo, we can use our post play like a boxer pounding the body.

I also look for us to take long rebounds and turn them into fast breaks opportunities. To me this screams out for big games from Brown and Smith, who are matchup problems and seem to play really well in transition.

Their top six players in minutes played so far this season are all listed as guards and none are taller than 6'6". As a team through three games they are shooting 34% from 3.

Otherwise it's $30 per month if you buy it per month. At least that's how I saw it.

And they only take credit cards - so I wonder how painful it is to have to cancel the subscription.
Like this! Liked
Top

Guess espn plus doesn’t do tournaments, oh well
Like this! Liked
"Home, home again I like to be here when I can. When I come home cold and tired, it's good to warm my bones by the fire".
Top 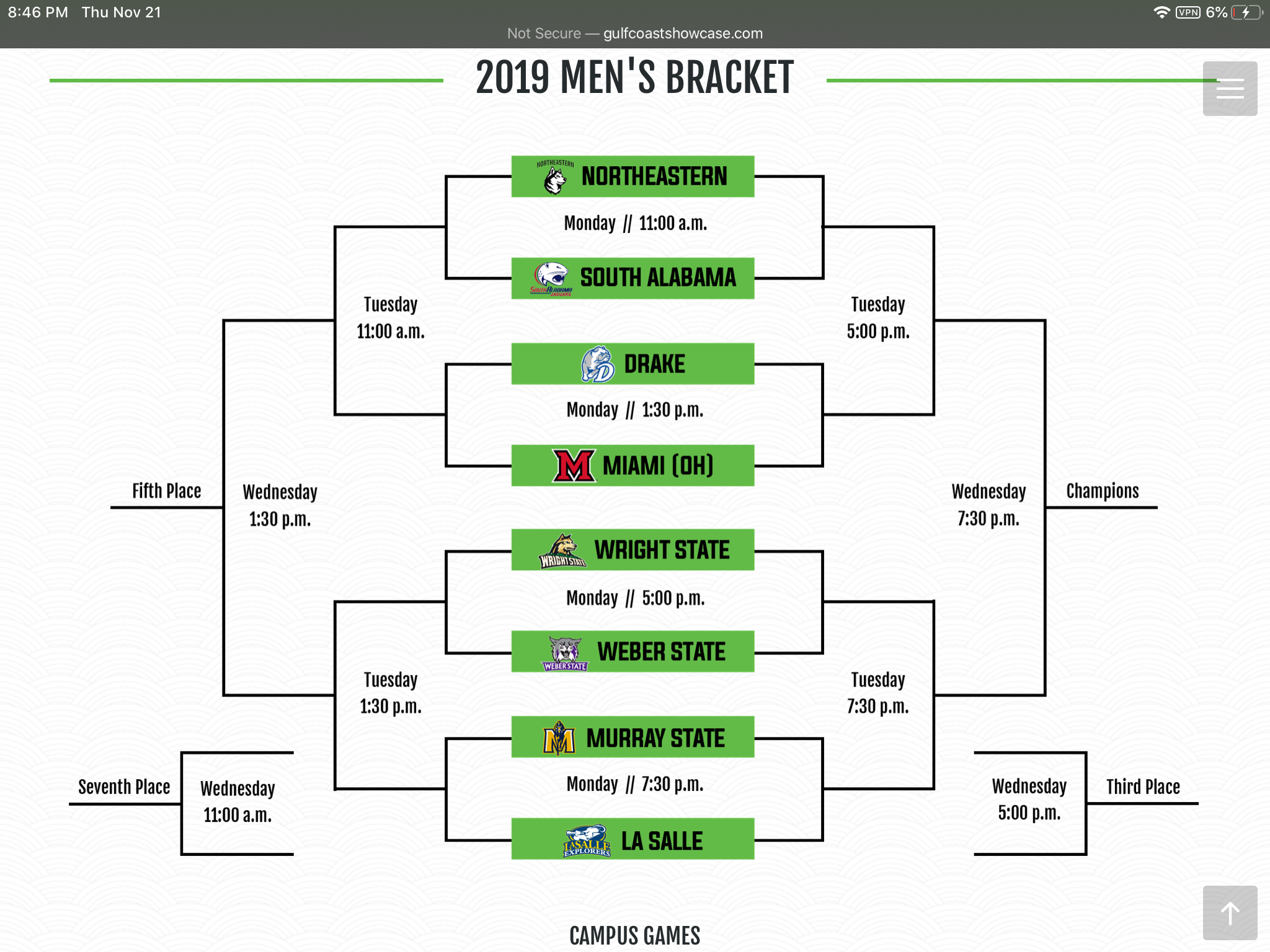 Otherwise it's $30 per month if you buy it per month. At least that's how I saw it.

And they only take credit cards - so I wonder how painful it is to have to cancel the subscription.

You are indeed correct. You could pay $30 to watch all 3 games, but I will leave it up to Neal and Kenny to use Al Gore's internet to paint the mental picture for me.
Like this! Liked
Top

Racers perimeter defense is not good right now. LaSalle is hitting 3s like Florida State was in the tourney last year. LaSalle looks like they scouted Murray out very well and are playing really good defense. Surprisingly, Murray losing it on the boards too. This is going to take a lot of patience on the Racers part.
Like this! Liked
Top

wkeown wrote: ↑Mon Nov 25, 2019 7:00 pm Racers perimeter defense is not good right now. LaSalle is hitting 3s like Florida State was in the tourney last year. LaSalle looks like they scouted Murray out very well and are playing really good defense. Surprisingly, Murray losing it on the boards too. This is going to take a lot of patience on the Racers part.

Sounds awful, we miss having several shooting guards.
Like this! Liked
"Home, home again I like to be here when I can. When I come home cold and tired, it's good to warm my bones by the fire".
Top

Must be the football playing
Like this! Liked
Top

wkeown wrote: ↑Mon Nov 25, 2019 7:00 pm Racers perimeter defense is not good right now. LaSalle is hitting 3s like Florida State was in the tourney last year. LaSalle looks like they scouted Murray out very well and are playing really good defense. Surprisingly, Murray losing it on the boards too. This is going to take a lot of patience on the Racers part.

McMahon is pissed. Said LaSalle is a better team, a tougher team, better prepared, better coached. At this point, his assessment is correct. We had no answer for their defense and no defense for their offense. When we are finally get a (poor) shot off, we have four guys floating around the perimeter and our one guy getting hammered inside trying to get a rebound.
Like this! Liked
Top

La Salle has 10 turnovers at the half and is up 15. You don't see that often.
Like this! Liked
Top

Between the Ja injury and the awful first half of the game, looks like I'm hitting the DVR, catching up on shows.
Like this! Liked
Top